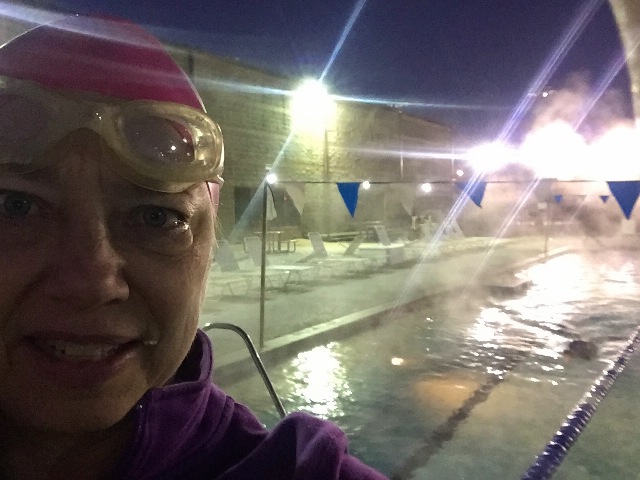 Family and Occupation:  My husband is the UU minister in Fayetteville. I work for the Fay Jones School of Architecture + Design as an administrative supervisor. I have had two former careers: 20 years in advertising and 12 years as a psychotherapist.

Swimming Background:  I grew up swimming in the lakes of Wisconsin. Everyone said I must be part fish — I was always in the water. I began lap swimming in college. I am mostly self-taught. My husband and I moved to Chicago in 2007 and we purchased a condo three blocks from Lake Michigan. Eventually I joined a group called the “Point Swimmers” who swim off of Promontory Point daily from April through October or November. In 2012 I swam my first Big Shoulders – an open water competition held the Saturday after Labor Day every year. I completed the 2.5k that year, and again in 2013. We moved to Fayetteville in the summer of 2014; then, in 2015 I had both my hips replaced. Last year I was able to compete again in the Big Shoulders Open Water Classic. The water was 64 degrees and we had 2-3 foot waves, but it was glorious!

Swimming Hero:  Ted Erikson is my hero. His 90th birthday was recently, and the Point Swimmers celebrated with an indoor swim followed by cake and festivities. Ted has swum the English Channel twice, and has swum across Lake Michigan. He continues to swim competitively in the pool, and will dip in the Lake most days.

Favorite drill/workout:  I love to swim long distances. Getting in the zone is priceless.

Do you participate in other sports?  In my youth I participated in Trampoline Town, USA, a tumbling and trampoline club. I also water skied and played tennis and racquetball. All that is gone now, with the hip surgeries.

Where do you currently swim?  Fayetteville Athletic Club